Chinese manufacturing giant, Huawei, released the Huawei Mate 40 series a few days ago. This series has four models which include Mate 40, Mate 40 Pro, Mate 40 Pro+, and Mate 40 RS Porsche Design. The initial expectation was that all these phones will come with the Huawei Kirin 9000 SoC. However, while the three top models use the Kirin 9000, the Mate 40 comes with the Kirin 9000E. This was a huge surprise at the conference because there was no speculation regarding this chip.

However, there have been questions regarding the two Kirin chips. The major question has been “What is the difference between these chips”?. Huawei fans and smartphone enthusiasts are curious to know the major differences. Will the use of this chip significantly reduce the Huawei Mate 40 performance? 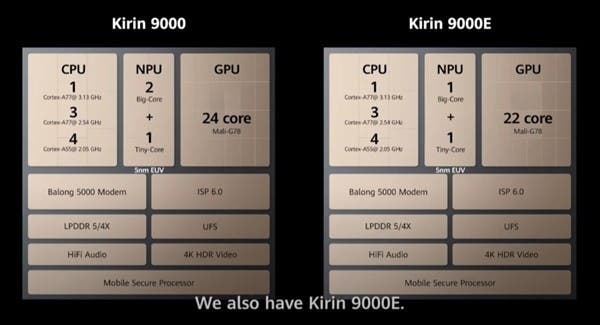 As shown in the figure above, the difference between Huawei Kirin 9000 and Kirin 9000E is very minimal. Both are equipped with a Mali-G78 graphics and image processor. However, while the Kirin 9000 uses a 24-core version, the Kirin 9000E has 22 cores.

Huawei Mate 40 comes with a lot of compromises

The biggest compromise in the Huawei Mate 40 is probably the Kirin 9000E. However, we have seen that it will not significantly affect its performance thus there is no cause for alarm. However, this smartphone also comes with significantly weaker specs in other aspects.

First of all, we have fewer sensors on the Huawei Mate 40. A triple rear camera setup comprising of 50-megapixel primary, 16-megapixel ultra-wide, and 8-megapixel telephoto lens. The primary sensor is taken from the Pro lineup however it lacks the periscope lens. On the front side, you get a single 13-megapixel shooter meaning there is not a pill-shape notch but a punch-hole, which looks less distracting. However, if you use facial recognition, it will be less secure than on the Pro models. This is because the Mate 40 lacks a 3D ToF sensor.

Well, the absence of some sensors is not the only difference. The Mate 40 Pro also doesn’t feature the 65W fast charging. The charge is limited to 40W on the Mate 40. Most importantly, the smartphone lacks wireless charging. Huawei has given a 3.5mm headphone jack for all the compromises made. There is no headphone jack port on the Pro models.