Recently, Teme showed a set of back camera designs for the Honor V40 series and the Nova 8 series. As we can see from the image, the back design of the two smartphones adopts the design style of a gimbal main camera and multiple auxiliary lenses. The arrangements are basically the same for both phones. However, there is an eye-catching difference – the Honor V40 uses a rectangular camera design, and NOVA 8 uses a rounded rectangle design. 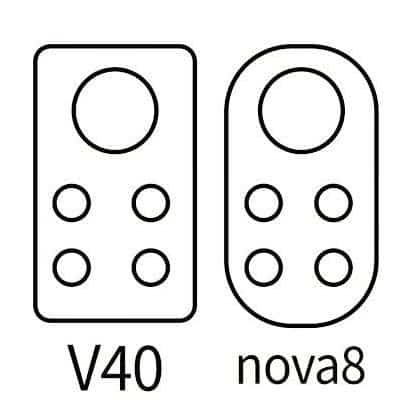 The lens design on the back of the Honor V40 no longer adopts the matrix three-camera design of the Honor V30 series. Instead, it comes with a gimbal camera module design similar to the VIVO X50 Pro.

In the core parameter configuration, the high-end version of the Honor V40 series (V40 Pro+) is expected to come with the same Kirin 9000 chip of the Mate 40 Pro. Plus, it should support the same 66W super-fast charge of the Mate 40 Pro. The main camera use the same RYYB 50MP CMOS. And on the opposite side, on the front, it may use the similar dual-camera selfie ‘pill’ design of the V30 series. In addition, the Honor V40 series is likely to continue to adopt the dual-chip solution of the V30 series.

Also, we think this year’s Nova 8 is likely to be consistent with the Honor V40 series in terms of core configuration. However, in terms of design, it will come with a combination of styles of the Nova 6 and the Honor V30.