This month is going to be hot. And we don’t mean weather at all. Starting today, the major smartphone makers will uncover myriads of new top-end smartphones. Everything will begin with the Xiaomi MIX 4 (today), continue with the Samsung folding screen smartphones (tomorrow) and Honor Magic 3 (the day after tomorrow), and reach its peak on August 17, when the iQOO 8 series smartphones will be officially announced. Well, for the first three models, we have talked too much. And now it’s the right time to disclose some news about the iQOO model. 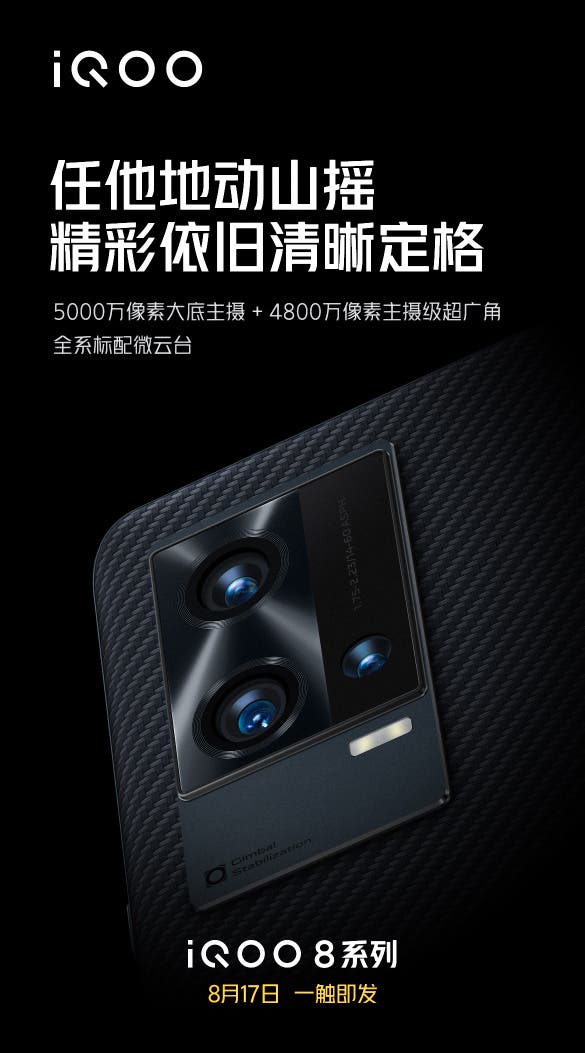 Today, the company released a poster and talked about the camera system of the phone. It turns out the iQOO 8 will be powered by a 50-megapixel outsole main camera. Other than that, there will be a 48-megapixel main camera-level super wide-angle sensor and a VIS five-axis micro-panel.

To prove that these are not just words, the company also released some samples. Actually, the samples are stunning. And looking at this kind of information, we understand that this year the flagship phones will make a tough competition to each other in terms of imaging. As a reminder, the Honor Magic 3 is said to cooperate with IMAX ENHANCED to provide a professional-movie-level video recording.

Well, aside from the amazing camera, the iQOO 8 will also have almost no equals in terms of performance. The phone will come with the currently-known most powerful Qualcomm chip dubbed the Snapdragon 888 Plus. Plus, there will be an LPDDR5 RAM as well as a UFS3.1 native storage. The company also said there will be an independent display chip. By the way, the phone will adopt a 2K resolution screen. The latter is going to support a 120Hz refresh rate, and also it uses a microprism technology, a LTPO refresh rate stepless variable speed technology, and the world’s first E5 high-brightness luminescent material.

Recently, as @DCS reported, the iQOO 8 series now have got the Chinese 3C certification. The certification is for both the iQOO 8 and iQOO 8 Pro. The corresponding scnreeshots show that the iQOO 8 comes with a 120W super-flash charge.

So when taking into consideration the display, processor, camera, memory, and charging specifications the iQOO 8 will come with, it becomes clear that our protagonist will be fighting for the highest prizes. And for other manufacturers, it will be quite difficult to offer products with similar features. We also mean the iQOO smartphones have been always priced affordably.

Next Second OnePlus Nord 2 explodes, this time in the hands of government officer