Yesterday, Samsung announced that it has opened its first offline store in India fully staffed by women. The opening of this store coincides with this year’s International Women’s Day celebrations. The company is opening this store as part of the #PoweringDigitalIndia initiative. Located in Ahmedabad, Gujarat, India, the offline store aims to shore up Samsung’s market share in the country by empowering Indian women. The offline store is also equipped with a brand-new Samsung Smart Cafe, which also employs all female employees. 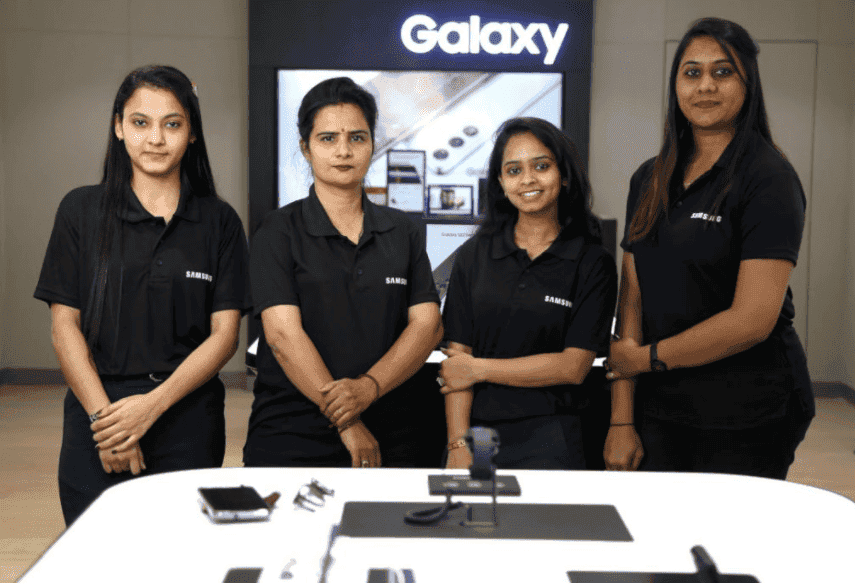 In addition, store managers, Samsung Experience Consultants, and other employees have received training on the Samsung Galaxy ecosystem along with other specialized training including accounting, inventory management, and customer service.

Samsung Southwest Asia President and CEO Ken Kang said in a statement that the company is excited to open its first all-female offline store in India and appreciates the benefits brought by the Samsung female team. The company claims that it is full of confidence in the possibilities for this store. Ken Kang also claims that Samsung is focusing on increasing the number of women in its workplace. Furthermore, the company hopes to develop its next generation of female leaders through its various gender-friendly programs.

It is important to note that this all-female store is only with respect to employees. This does not mean that only females can walk into the store to make purchases. Both men and women customers can make use of the store. However, just know that it is a woman that will attend to you on all levels should you choose to use this store.

Samsung Electronics’ entry into the OLED TV market slows down

According to BusinessKorea reports, Samsung Electronics and LGD’s OLED panel negotiations have stalled because the price gap failed to narrow. The two companies are engaged in a price war. Although Samsung Electronics hopes to buy OLED panels from LGD at a lower price than LG Electronics, this is a requirement that LGD cannot accept.

Samsung Electronics is working on a TV lineup adaptation plan. Samsung Electronics will launch the micro LED TVs first, then the mini LED TVs (Neo QLED TVs), before the OLED TVs. If this is actually the case, the price of OLED panels should reduce as much as possible.

An industry insider has this to say

Some analysts believe that the QD-OLED TV which should launch in H1 2022 will also delay. Samsung Display started mass production of QD panels in November 2021, but production has not yet stabilized. Samsung Display’s annual output of QD-OLED panels is 1 million. However, due to low production, industry sources estimate that this amount is not enough to meet Samsung Electronics’ panel demand.

Next Xiaomi reveals the features of the Redmi K50 series

This Is How Samsung Plans To Recapture Smartphone Market In India