Samsung is one of the most relevant giants in the world of technology nowadays. The company certainly takes the spotlight often with its Galaxy smartphones, but Samsung has a lot more to offer. The company also has its own range of Galaxy laptops with options for the cost-effective to the premium segment. The company also bets on the Chromebook market with timely releases. Today, the company has unveiled a new Samsung Galaxy Chromebook 2 360 with a 2-in-1 design. The device was revealed at the British Educational Training and Technology (BETT) forum and goes on sale from April 15.

The new Chromebook 360 flaunts a 12.4-inch TFT panel with a resolution of 2,560 x 1,600 pixels. The display offers 350 nits of brightness. That may sound low when you compare it with a smartphone. However, this is a device that you probably won’t use under direct sunlight. Moreover, and as a good 2-in-1 device, you can rotate it to make it work as a tablet. The device also features a webcam with a 720p resolution. Users can pick a specific variant with LTE connectivity. Therefore, you can use it while on the go through cellular internet connectivity. 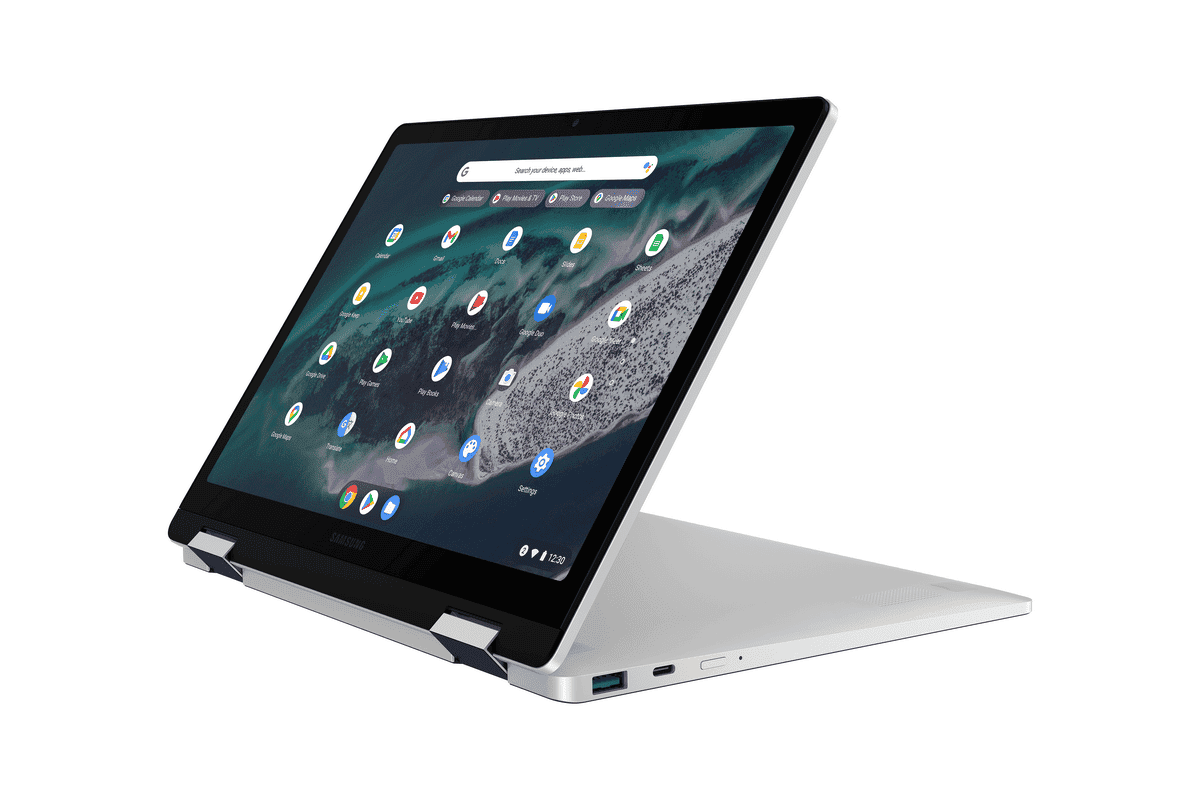 Under the hood, the Galaxy Chromebook 2 360 packs an Intel Celeron N4500 processor. It’s a modest chipset but fits perfectly with a device and OS that shouldn’t be used for intensive tasks. There is also Intel UHD graphics. The phone packs 4 GB LPDDR4X RAM and has 64 GB or 128 GB of eMMC storage. For connectivity, we have two USB Type-C ports, two USB 3.2 connectors, a headphone/microphone combo jack, a micro SD card reader, and a nano security slot. The laptop draws its powers from a 45.5 Whr battery. According to Sammy, this battery can last up to ten hours of continuous usage. In terms of software, you’ll find everything you expect from Google’s Chrome OS. As we said before, there is an option with LTE connectivity. When it comes to the Wi-Fi variant, it supports up to Wi-Fi 6 which ensures fast seamless connectivity.

The Samsung Galaxy Chromebook 2 360 comes in a single Silver colorway. The device cost around £419 for the variant with 4 GB of RAM and 64 GB of Internal Storage and Wi-Fi connectivity. For those who want a variant with LTE connectivity, it will set you back by £499.

Worth noting that Samsung is also gearing up to introduce new Galaxy Books with Windows very soon.