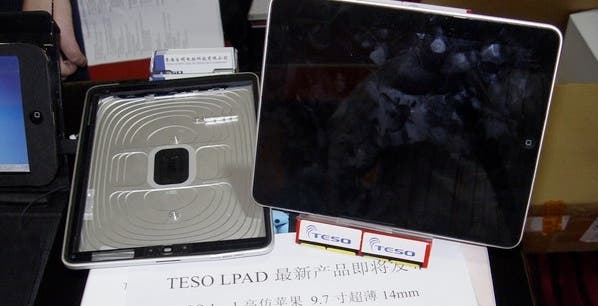 Teso are either raising the clone bar a good few notches with their new LPAD or, as some speculate, being a little dodgy and have actually just stuck a non functioning Apple iPad on  display and claimed it as their own.
If we take it as genuine it really is a great looker. Of all the iPad copies we’ve seen this is by far the most convincing.

The bezel and screen are very well finished and look to be of a high grade material, and the alloy backing of the LPAD seems to have been lifted straight from the real thing with the same 30 pin dock connector and speaker mesh located at the bottom edge near the home button.

Not only does the back look  fantastic from the outside but the machining on the inside is practically unheard of in Shenzhen, it looks so good it looks just like the inside of a real iPad……… Fishy
The back of the device also has an engraved logo in the center in the same location as the Apple would be on the iPad, but we couldn’t make out what the logo was at it was covered with tape….. Fishier
Teso claim the LPAD runs Windows 7 on either a 1.2Ghz Atom CPU or Android on a snappier 1.9GHz Atom unit which would make the LPAD a very quick little device, unfortunately we were unable to see it in action as it won’t actually boot up!! …… Fishy Dodgy and damn right cheeky!
If you ask us Teso are trying to pull a fast one by actually displaying a genuine iPad, however maybe they’ll prove us wrong next month when it is planned to launch!

Subscribe to our feed to get more clone news

Next Asia's Largest Water Park Opens In Beijing Next Month