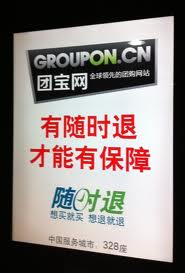 Groupon have just announced that they have acquired Groupon.cn. While on paper this just looks like a parent company gobbling up a Chinese sub-brand, this transaction is in actual fact the first case of a foreign brand buyings it’s Chinese clone!

While Groupon.cn has the same name as the foreign company, up until today, that was where the similarities ended. Groupon.cn was actually a copycat company using the popular Groupon brand to raise capital. In fact in the first month the fake Grounpon started up they managed to raise $2.2 million!

Groupon.com seem to be one of the first foreign companies that have decided to buy their clone rather than to take them to court.