We only have 3 more days to wait until we finally get to see the first official details of the HTC One (aka the HTC M7), but this hasn’t stopped Chinese clone maker GooPhone jump the gun and show off their HTC One clone named the GooPhone One!

GooPhone are notorious for launching highly accurate clones phones with the Chinese phone maker famously hitting the headlines last year when they threatened to sue Apple should the iPhone 5 come to China. Of course the legal battle never happened but GooPhone did launch an unbelievably detailed clone called the GooPhone i5 which we reviewed last month.

The the i5 on the market, GooPhone are looking for the next hot phone to clone and it appears that they have chosen to launch a knock-off version of the new HTC One (or HTC M7).

The renderings shown above show that the GooPhone version of the M7 will look almost identical to the leaked renderings we have seen of the flagship 4.7-inch HTC One, but with the addition of the GooPhone logo, and what appears to be Lewa OS rather than Sense 5. 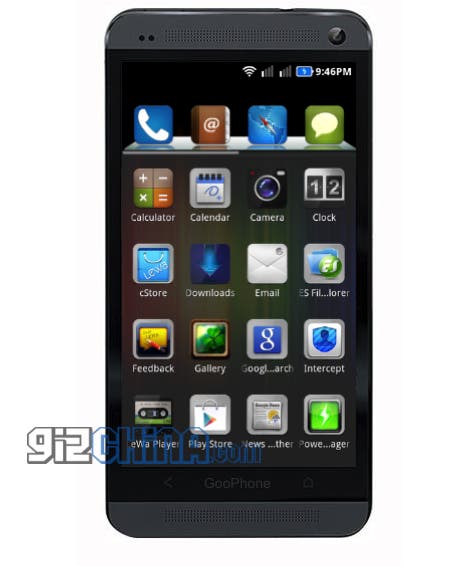 Keen eyed readers will notice that the images show two signal strength indicators, hitting that the GooPhone One will support dual-sim stand-by and will likely use Mediatek’s most up to date quad-core processor, the MT6589!

From what we know from other MT6589 phones and previous GooPhone phones we can assume that the GooPhone One HTC M7 clone will likely boast a 4.7-inch display, at least 1GB RAM and possibly even a 13 mega-pixel rear camera!

We’ll keep a close eye on the GooPhone One and how the phone develops!

Previous The Cubot A6589 is a quad-core MT6589 Galaxy Note 2 clone available now!