Xiaomi launched the updated M2S and all new Xiaomi M2A on Tuesday, but real photos of the all new entry-level phone have been difficult to get hold of until today.

Xiaomi are not your typical smartphone manufacturer. Everything they do is different from the high specs and low pricing, to their sales and marketing strategies, and now even their latest phone!

Although the Xiaomi M2S is the companies more powerful flagship model, the lower price M2A is such a great phone we expect many Xiaomi fans opt for the cheaper phone! Even I’m considering to buy one!

If we didn’t know any better we would assume the larger of the two phones shown here is the flagship Xiaomi model, but this is not the case! In fact the cheaper Xiaomi M2A has a larger 4.5-inch display where as the M2S has a 4.3-inch unit. 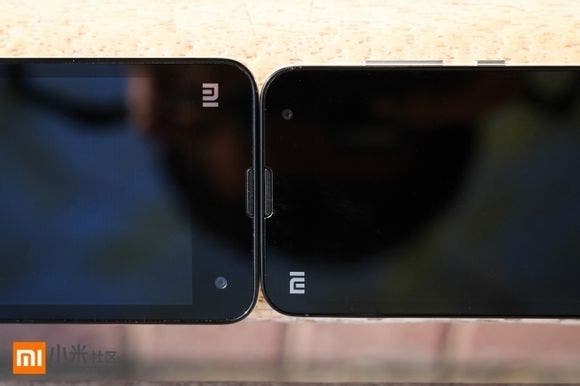 As the M2A started as a blank canvas the designers behind the phone have managed to include some other great features, features which the top-of-the-range phone doesn’t have! NFC is built in to the new phone allowing for easy transfer of data and electronic payment, WI-FI has been updated with a new 5Ghz chip, and Dirac HD Sound has been included to allow to easily connect to car audio systems!

The M2A represents such great value that even owners of the current Mi2 might even consider buying one an upgrade, if they don’t mind just 1GB RAM and a dual-core CPU.

Speaking of the CPU, the M2A uses an updated version the dual-core Qualcomm S4 Pro based on Krait 300 architecture, running at 1.7Ghz. This is by no means a slow phone!