LeTV are set to make their first 2016 phone launches, and from these TENAA leaks the phone is looking rather interesting already. From the leaks we see the phone is codenamed the LeTV X621, and form the images we see some significant changes for this year’s phones.

First of is just how small this phone looks. From the images alone we would have guessed this phone to be a 5-inch device, but from the documents we see the panel is in fact a 5.5-inch 1920 x 1080 panel. The reason the phone looks smaller in these images is the new rear camera lens design, which is significantly larger than the square rear fingerprint scanner.

Counting on with the images we see that LeTV have given the Le2 some additional black detailing between the home and power button and along the sides following the display. Will these black borders mea that the Le2 has a edge to edge screen or not we don’t yet know, but it is a new styling feature for phones.

Going through the details that TENAA have provided we can see that the LeTV Le2 will feature a 2.3Ghz Mediatek Helio X20 chipset (MT6797), with 3GB RAM, and 32GB internal memory. 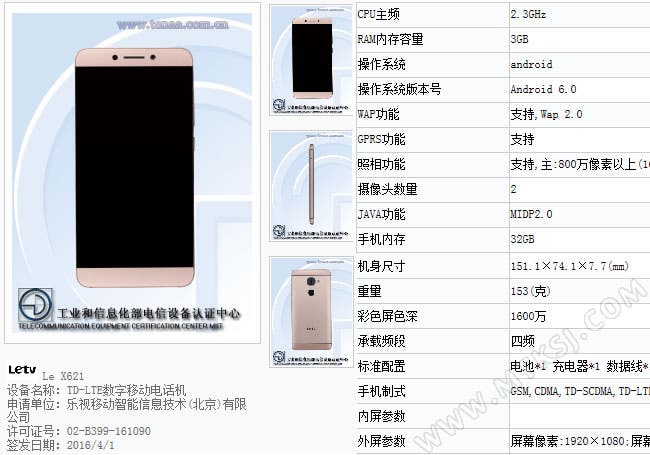 The battery is a 3000mAh model, which is quite small when you take in to account the new Meizu Note 3 has a 4100mAh battery and only costs 799 Yuan.

Other hardware details that TENAA have revealed are an 8 mega-pixel front camera, 16 mega-pixel rear camera, VOLTE,, LEUI with Android 6.0, and a USB Type C.

So there it is a possible borderless LeTV Le2 with Helio X20 which might cost around 1000 Yuan, what do you think?