A entire year has passed since we got introduced to the Redmi Note 4, Xiaomi’s Redmi best seller up to date. Its natural that the handset’s fans have got desperate waiting for some news or rumors that could point to the Redmi Note 5 release. However, all those attempts ended in a huge brick wall, with Xiaomi being quieter than usual.

Previous rumors (or dreams) pointed that newest Redmi Note would arrive with a Snapdragon 660. That got pretty much scrapped when Xiaomi launched the Mi Note 3 and the Snapdragon 630 turned in a more likely choice for the Redmi Note range.

Yesterday, TENAA introduced us to the true Redmi Note 5 specs and pretty much to the handset’s final design. The leaks, were kinda depressing for some waiting for a really-bezeless device or dual cameras, but still aren’t bad considering previous Redmi’s phones. According to TENAA the Redmi Note 5 will arrive with the Snapdragon 630 paired with 3GB or 4GB of RAM with 32GB or 64GB of onboard storage. The handset retains the 4000mAh battery keeping its well known endurance.

The Redmi Note 5 will also follow the full screen trend, bringing up a 5.99-inch FHD+ 1440×2160 resolution 18:9 display. The device aims to inherit the bezelless nature of the likes of Mi Mix, with slimmed bezels and rounded corners.

Just one day have passed since TENNA exposed the device, but some renders showing pretty much what to expect from the device, started to appear all over the internet. Judging by the photos, the device in fact may have a more appealing look when compared to its predecessors. 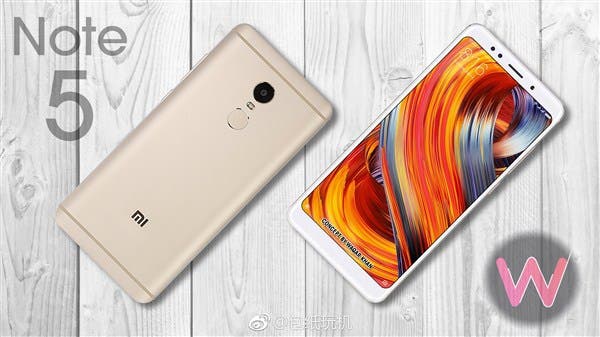 While some previous renders of the Redmi Note 5 pointed a much more bezeless device, the new ones are away from looking bad. If you remember, the LG G6 was the first to bring a 18:9 full screen, but the bezels aren’t the smallest ones.

According to previous reports, the Redmi Note 5 will be unveiled in the next month, some time before Single’s day, that happens on November 11. It should come priced at 999 Yuan ($150) for the entry variant and should go up to 1299 Yuan ($196) for the top one.

So looking at these renders, did Note 5 allegedly design convinced you? Let your impressions in the comments below.

Previous Mysterious HTC device appears in TENAA, could it be a revamped HTC U11?

Next Hisense may join soon to the Full Screen party