There have been some discrepancies with regards to the rollout of Android Oreo to OnePlus 3 and 3T. Some users on OnePlus’s official forum and Reddit have been reporting that at a point, they could see the update and the next minute, it was gone with a statement that says that Android Nougat is the latest version available for download. Although the company has not made an official statement in this regard, it appears that there are some unresolved bugs that need fixing on the Oreo update for OnePlus 3/3T. 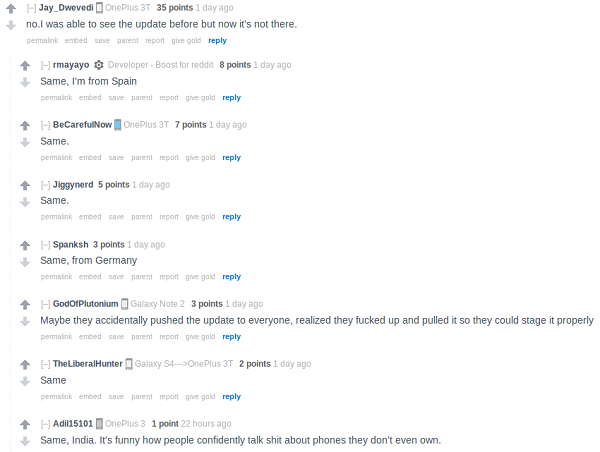 A OnePlus forum user actually installed the update before it was pulled out and the user lamented low speakers, terrible network speed, and malfunctioning of some apps.

There is actually no cause for alarm because the update will probably be restored but it might not be according to the normal schedule. Recall that about a week ago, Android Oreo Beta arrived OP5 and it comes with a whole lot of new features. We will keep an eye on the developments and will certainly inform you when the proceedings get back on track. What are your experiences with the flashed Android Oreo update on OnePlus 3/3T? Let us know in the comment section below.

Next Oppo R11s Is The Best Smartphone For Pro Photography