Want it or not, but we are entering the era of full screen 3.0. The VIVO NEX has been already announced with a screen ratio of 91.24%. Today, OPPO released the Find X with an astonishing design and a screen ratio of 93.85%. Seems the next model with a genuine full-screen will come our way from Nubia, a brand that is known for its borderless models. It’s not difficult to guess we are talking about the Nubia Z18 that has been rumored and leaked much previously. Today, it spotted in a photo showing its beauty. 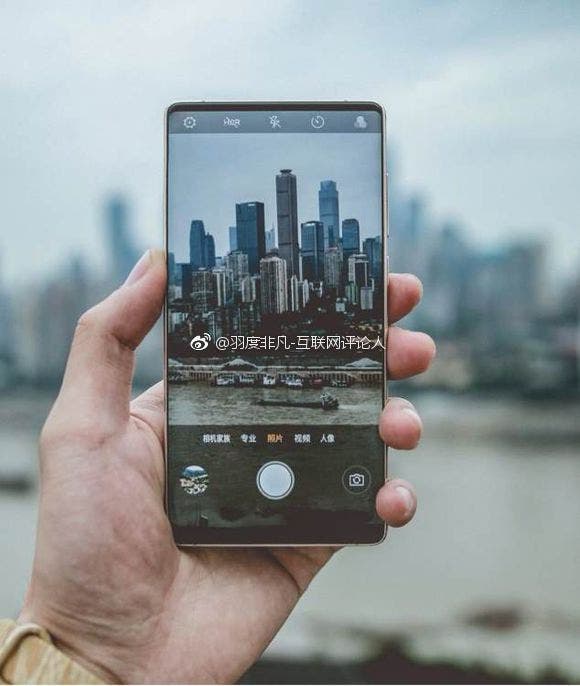 In early May, the Nubia Z18 appeared on TENAA. It was a good hint the phone will be released in a couple of months. But seems its release date is pushed back to July, August, or even September. There are no announcements concerning the press conference. However, this doesn’t mean we should sit tight.

According to the news leaked yesterday, the Nubia Z18 will use an OLED screen, a dual-camera, and a pop-up front camera just like the VIVO NEX. As for now, the spotted photo shows the manufacturer has canceled the Sharp AQUOS design seen earlier. The Z18 should correspond to the slogan. Thus, it should have a higher screen ratio than many other models on the market. At the same time, we can see the forehead and chin are narrowed a lot. So the screen proportion is going to exceed 90%.

In terms of configuration, the Nubia Z18 is equipped with a Qualcomm Snapdragon 845 processor. This chip is based on a 10nm LPP process. It also uses the Kryo 385 architecture and an octa-core design. The CPU clock speed reaches 2.8GHz. The SND845 is coupled with an Adreno 630 GPU, 6GB LPDDR4X RAM, and 64GB UFS 2.1 flash memory. It’s said there will be a higher model with an 8GB + 128GB memory combination.

Previous Nokia 5.1 Plus To Come With Helio P18, Dual-Camera, and Bangs Screen

Next AllCall W2: Multiple sports modes can bring more benefits to your health