Samsung is expected to unveil up to 9 addition to its Galaxy A series of smartphones in the coming months. This will be in addition to the Galaxy S10 lineup and the Galaxy M series tipped t arrive soon. While the Korean firm hasn’t really revealed any useful information about any of the expected Galaxy A devices yet, we recourse to getting information about them from other sources. 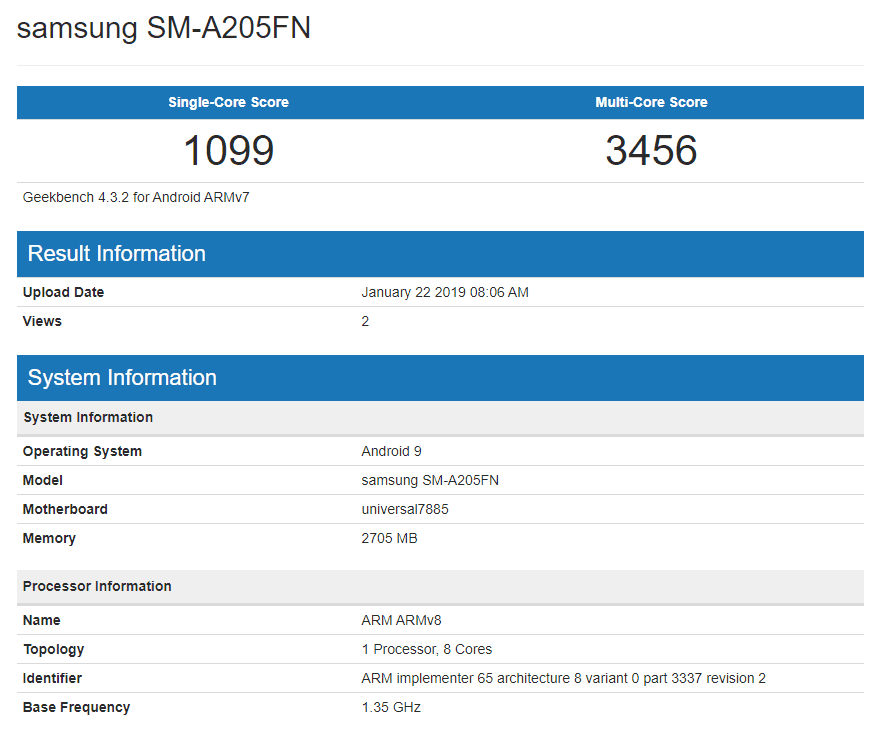 The device is tipped to arrive as the Samsung Galaxy A20, and going by the Geekbench listing, and similar to the Galaxy A30, the A20 will house the same Exynos 7885 14nm octa-core SoC under the hood , but with 3GB RAM size. It will boot Android Pie out of the box, returned a single-core score of 1099 and a multi-core score of 3456.

That’s about all the detail we can glean from the Geekbench, however, previous reports suggest the upcoming Galaxy A series will come equipped with the Infinity V display as well as an In-display fingerprint sensor, however, the Galaxy A20 been the most basic of the series might get a more traditional rear- or side-mounted fingerprint sensor instead.

More details about the Galaxy A20 and of course the more Premium Galaxy A series should pop up in the build-up to its launch, tipped for the end of Q1 or in early Q2 2019.

Previous Samsung Galaxy S10 may have a second display area