Currently, the most exciting feature of the smartphone is its display. Of course, there is also the main camera module. But the screen occupies more space. That’s why it attracts more attention. All manufacturers are doing their best to bring a genuine full-screen smartphone to their customers. The upcoming OnePlus 7 is going to be one of them. Previously, we have heard too much about this handset and its display. And as the launch date is getting closer, it’s logical we will get more news and non-official confirmations of this or that feature. Today, we have received news concerning its screen. 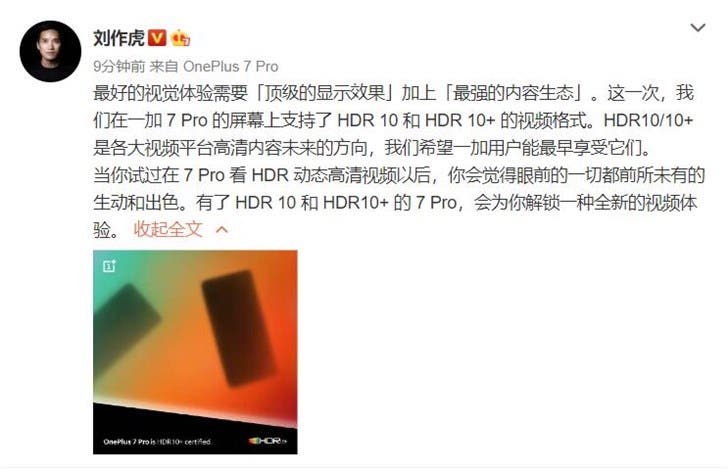 As you know, OnePlus has spent over 100 million yuan ($14.9 mln) to make a custom screen for its forthcoming flagship. Now we know the higher version of this phone, namely the OnePlus 7 Pro will sport a 6.67-inch QHD+ resolution curved surface panel, which uses Fluid AMOLED Display. The latter means it can automatically switch between 1080P and 2K according to the display content. The basic refresh rate is 60Hz and the maximum refresh rate is 90Hz. In addition, this screen also passed HDR10+ certification.

This was officially confirmed by OnePlus CEO. Liu Zuohu said that ‘the best visual experience requires ‘top-level display effects’, plus ‘the strongest content ecology’. This time, we brought HDR 10 and HDR 10+ video formats on the OnePlus 7 Pro screen.’

As for the rest of the features, the OnePlus 7 series is said to support dual speakers, a 48MP main camera + 16MP wide-angle lens + 8MP telephoto lens combination, and pop-up front camera. According to the information previously disclosed by Liu Zuohu, the screen used by the Plus 7 Pro is a custom-made 90Hz screen. The screen’s authoritative screen test mechanism, DisplayMate, has an A+ rating. In terms of battery life, the OnePlus 7 Pro will be packed with a 4000mAh battery and support 30W fast charging technology.

At last, Liu Zuohu confirmed on Weibo that the OnePlus 7 series will all use UFS3.0 memory.

Next Redmi Note 7 Officially Launched In The UK, Priced at £179