Nvidia is currently working on its next-gen Ampere based graphics card, to fall under RTX 30 lineup. Well, it seems like that’s not the only thing the brand has in stores for us. Nvidia is reportedly working on a new GeForce RTX 2060 graphics card. The new series might feature 8GB GDDR6 memory as opposed to the current 6GB memory in the current offering. 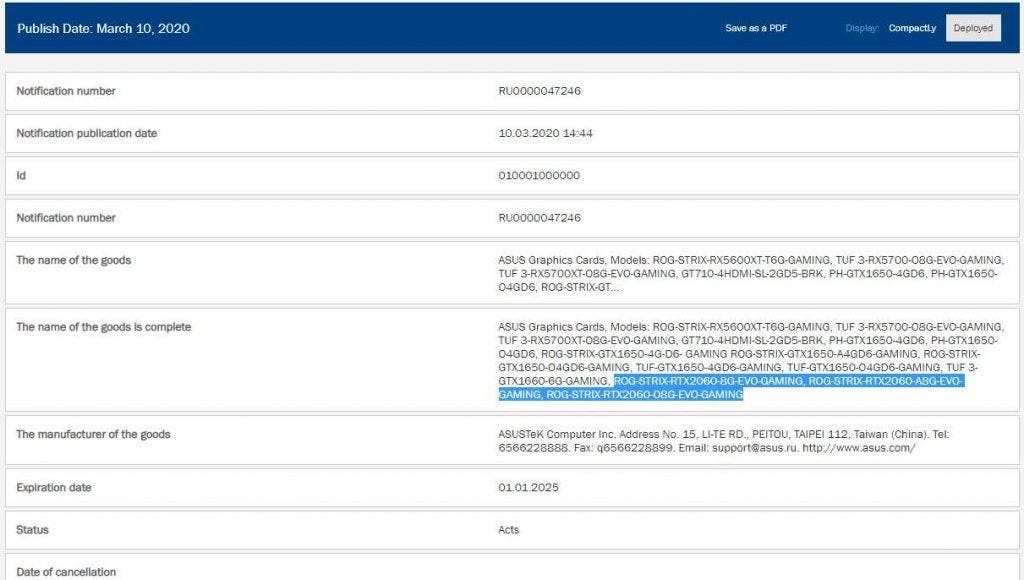 This report is courtesy of PCGamesN. The new graphic card recently surfaced on the EEC (Eurasian Economic Commission) listing. As per the listing, there is going to be three variants of the new revamped RTX 2060. In the listing, all the trio cards are from ASUS with the following name.

Apart from memory, the core configuration will most likely remain the same. This includes TU106 GPU core featuring 1920 CUDA cores and 14Gbps memory dies. The bus interface, on the other hand, might get a bump to 256-bit instead of the earlier 192-bit. With this, the card will offer bandwidth speed of 448GB per second.

To recall, Nvidia GeForce 2060 has a couple of variants such as the SUPER lineup that was released to compete with the AMD’s new GPU lineup. It also has a KO variant from EVGA with toned down costs. The RTX 2060 SUPER also comes with the 8GB VRAM memory, if you’re unaware for some reasons. We should wait for more information on the refreshed Nvidia GeForce RTX 2060 graphics card.

This also indicates that Nvidia might be looking to clear its current Turing stock to make the way for the upcoming Ampere lineup.