Slate tablet shipments were approximately 2.69 million units, a year-on-year decrease of 41.6%; detachable Tablet (pluggable keyboard tablet computers) shipments were approximately 3.92 million units, a year-on-year increase of 286.0%. The shape transformation trend is obvious. After getting out of the low production capacity, based on the continuation of uncompleted orders in the previous quarter and a large amount of channel inventory replenishment, it strongly promoted the growth of tablet PC shipments in the second quarter. Telecommuting, online classes, and home entertainment also continue to drive consumer demand for tablets. However, due to the excessive impact of the epidemic on production capacity in the first quarter, China’s tablet PC market shipments in the first half of 2020 still dropped by 5.4% compared with the same period last year. 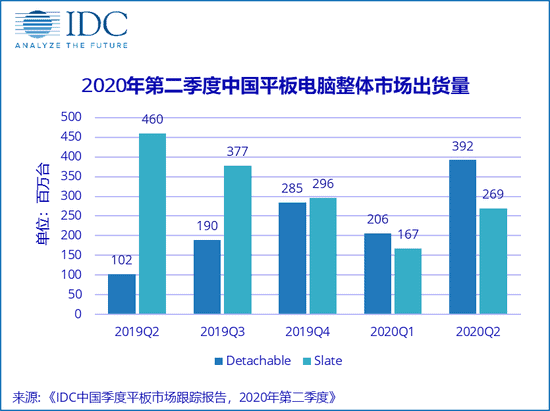 IDC believes that although the suspension of production due to the epidemic has restricted shipments in the first half of this year, the market demand that has been triggered at the same time has injected a boost from the previously dormant Chinese tablet market. The main products have entered the renewal cycle one after another. So this will stimulate more consumers’ enthusiasm for tablet computers.

Shipments in the commercial market are approximately 990,000 units. Although a 59.0% increase from the previous month, compared with the same period last year, it is still in a downward trend, with a year-on-year decrease of 14.1%. Education still accounts for the largest shipment share in the commercial market. It has a year-on-year increase of 33.4%. The downturn in the economic environment caused by the epidemic has led to a decline in corporate purchases. Among them, LB (large enterprises) fell 24.4% year-on-year, while SMB (small and medium-sized enterprises) fell 45.3% year-on-year. The commercial market is expected to usher in a rebound in the next quarter thanks to the peak procurement period for education and government projects.

With the easing of the epidemic, consumer demand for tablet computers stimulated by this still exists. After the capacity problem is resolved, the consumer market has shipped about 5.61 million units, a year-on-year increase of 25.9%. Stable market demand and the release of more attractive new models will help the consumer market continue to grow in the second half of the year. 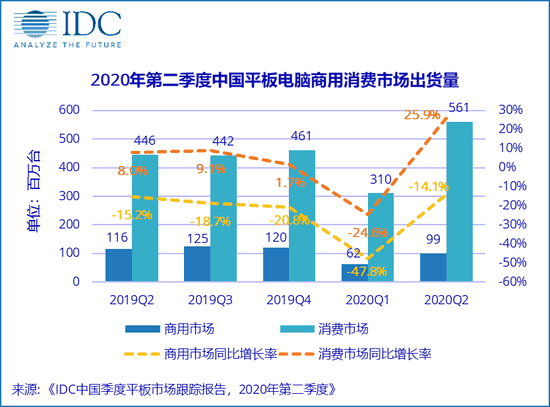 Returned to the number one shipment. Apple’s iPad shipments in the second quarter were approximately 2.76 million units, an increase of 18.7% year-on-year. As said, it occupied a market share of 41.8%. With the gradual return of foundry production capacity and supply chain to normal, Apple maintained a high shipment volume. Thanks to the vigorous promotion of various home appliances and the subsidy vouchers launched by local governments to stimulate consumption, cumulatively, during the ‘618’ period, the iPad series have the largest discounts in history. The latter successfully stimulated consumers’ desire to buy. With the update of the cost-effective ‘iPad Air’ series and the performance upgrade of the entry-level iPad series in the second half of the year, the two product series with the highest shipment ratio will further enhance the iPad’s competitiveness and drive growth.

It has the highest year-on-year increase. In the second quarter, Huawei’s tablet shipments were approximately 2.45 million units, an increase of 59.5% year-on-year. And its market share accounted for 37.1%. Although still maintaining the highest year-on-year increase in shipments, Huawei began to enter the product update and adjustment cycle in the second quarter. Old products began to stop production. New products were released one after another. Especially, Honor has updated its products. With the official shipment of the 5G version of the MatePad Pro and the follow-up of 5G version of Honor v6, Huawei has taken the first mover advantage in the 5G tablet market. In the next-generation product line, the implantation of the ‘education center’ helps Huawei tablets enhance their educational attributes. So they not only meet the entertainment and office needs of adults but also they are more suitable for children’s educational use. They can even directly compete with educational tablets.

The performance is steady and rising. In the second quarter, Microsoft’s tablet product shipments were approximately 230,000 units. It’s an increase of 16.0% year-on-year, and it accounted for 3.5% of the market share. The Surface Go series relies on the demand for online courses to increase the proportion of shipments. The timely listing of new products Surface Go 2 and Surface Book 3 also helped Microsoft resume its year-on-year growth. The Surface X series has won the favor of Chinese consumers with its ultra-light and thin appearance. Its shipment ratio is higher than that of other countries.

The consumer market is growing. Lenovo’s tablet shipments in the second quarter were approximately 170,000 units, a year-on-year decrease of 19.1%, and the market share of shipments was 2.6%. As government and education major projects will be concentrated in the next quarter, and corporate procurement has been affected by the epidemic for a long time, Lenovo’s shipments are still in a downward trend year-on-year. However, with continuous resource investment, Lenovo achieved a year-on-year growth of 19.4% in the consumer market.

IDC believes that the sudden ‘new coronavirus epidemic’ in 2020 has had an important impact on the development of the electronic terminal industry, especially opening up a new development space for the tablet market that has been saturated for many years.

Next In 3-4 Years, Apple Watch Models Will Use Micro-LED Screens