Since the launch of the popular audio chat application, Clubhouse, it has been a sensation. Many bigger applications have been copying its operations. However, Clubhouse keeps growing stronger. At the launch of this social app, it was only available for desktop and iOS. However, there was no Android version. Nevertheless, everything changes with time. A few weeks ago, the company announced that Clubhouse for Android beta is available for download. Today, Clubhouse officially announced that the Android version of Clubhouse has been officially launched.

As of early May, Clubhouse recruited beta testers for the application on Android. In mid-April, Android developer Mopewa showed a screenshot of using Clubhouse on a Pixel phone. 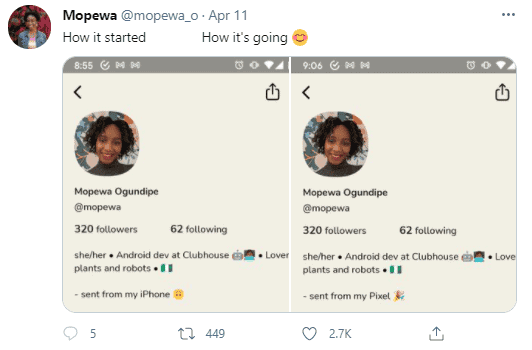 One year after the establishment of Clubhouse, the current latest valuation is approximately $4 billion. At the same time, bigger social media platforms like Twitter, Facebook, etc. have also followed Clubhouse and launched similar audio social products.

Clubhouse Will Face A Tough Competition

Since its introduction, Clubhouse has well over 8 million downloads globally. In fact, it is currently a new trend for social media giants. The likes of Facebook, Telegram, Twitter, Mi Talk (Xiaomi), TikTok, Slack, and Instagram already have or are working on their version of Clubhouse. TikTok is preparing a competitor of the Clubhouse application. This information comes from a quite reliable source, Reuters. According to Alessandro Paluzzi, a very well-known tipster, Facebook is working on a Clubhouse clone for its Instagram app. Telegram’s Voice Chat 2.0 is another alternative to Clubhouse which has been around since December 2020. With all of these bigger apps launching Clubhouse-like features, the app has a lot of work to do.

According to analysts, Clubhouse’s popularity is already declining. A report from Sensor Tower in March 2021 shows that the number of downloads for the app is a 72% decrease relative to February 2021. However, SensorTower did not give a reason for the significant drop in downloads. As of March 2021, the company had only 2.4 million downloads, down from 9.5 million in February.

Analysts believe that the service will continue to lose its popularity in the future if drastic measures are not taken. However, with the launch of Clubhouse for Android, we can be sure that it will pick up its downloads again. Although Clubhouse is only one year old, as of the end of March, it had approximately 134 million users. The company keeps getting millions of downloads monthly and it will even increase with the arrival of Clubhouse for Android.

Next Redmi Note 8 2021: Here's a look at chipset, camera, and display details