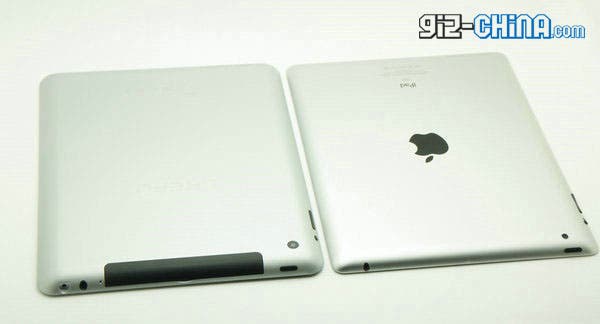 The Grefu M97 is the first and only really truly great iPad 2 clone available out of China. Of course the M97 runs an Android OS rather than iOS, but apart from that, just how close are the iPad 2 and M97 when compared side by side?

The M97 from Grefu may look just like the genuine iPad 2 from Apple, but the body is actually slightly thicker, not only that but the M97 has some extra expansion ports which iPad owners could only dream of.

Not only does the Grefu Andorid tablet have a 30 pin dock connector but there is also a built in HDMI out, 3G SIM card slot, and micro SD card reader all hidden beneath the black panel on the rear of the device.

Inside Grefu have out done themselves, as their iPad 2 clone actually packs a solid performing package.

The CPU is Freescale iMX535 1.2GHz chip, there is 1G RAM, 16G of built in storage (plus the SD card reader can add an extra 32GB) there are also 2 cameras the rear being a 3 mega-pixel unit while the front is a 2 mega-pixel shooter.

The 9.7-inch capacitive screen has a 1024 x 768 resolution and supports five-point touch.

On the operating side of things Grefu have opted for an Android 2.3 OS, but there could be plans for an ICS update in the future.

As with most tablets there are stereo speakers Bluetooth, 3G, 730g weight, and a 7600mAh battery.

Where to buy the Grefu M97 Andorid iPad 2 Knock off

You should be able to pick up a Grefu M97 Android 2.3 running iPad 2 knock-off from Andoird-sale soon.