Andi completed a comprehensive full JiaYu G4 review a few weeks ago when it first became available . I receveived my phone seven days ago, after a long wait, see my previous article .

[templatic_contentbox type=”info” title=”JiaYu G4 discount for GizChina readers”] GizChina readers can now save $22 and receive FREE worldwide shipping when buying the JiaYu G4 Basic from Antelife. Use the following discount code to take advantage of the saving:

So I thought I would share my initial thoughts and feelings on living with my phone(a Black Basic 3000mA Jiayu G4) for the first week. 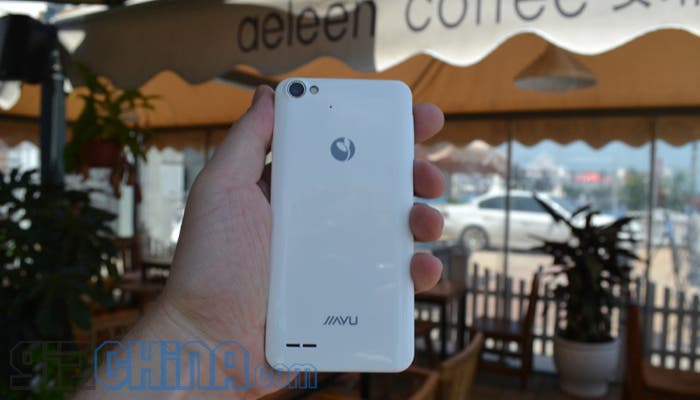 My specific requirements for a phone are driven by the fact that we spend half the year in the UK and half in Spain. This deters me from a contact (or two contracts) and I don’t want to spend a lot of money on technology that is rapidly superseded. So a reasonably priced Chinese phone with two SIM cards seemed a good choice. I don’t like Apple products (good technology, well integrated but too restrictive/proprietary).

I like Android and it has matured sufficiently to be on a par with or better than IOS. I want stock Android without a lot of ‘bloatware’. Most of my friends have I-Phones or Samsung Galaxy S3/S4. I want a phone that can hold its head up against this stiff competition and which is well made.

I don’t play a lot of video games but I do listen to lot of music so ideally I wanted a phone that has good audio and which will support a 64GB TF Card quickly enough to find albums/tracks. I also need a sufficiently large screen that I can actually use to read web pages / e-books and play Suduko, Majong and Crosswords. I want it to fit in my pocket i.e. no larger than 5” and I want any glitches to be sorted with software that is regularly updated.

So the 4.7” Jiayu G4 seemed a good choice as it ticked the boxes on all counts. But would it live up to expectations?

Whilst waiting to get my hands on my phone my initial concerns centred around four main aspects:

Well my phone finally arrived and overall I have to say I love the phone and whilst there are a few minor niggles it has really impressed me (so far but it is still only one week old!)

Would I like the phone and be happy to be using it?

It arrived with a ‘free’ flip cover, a screen protector but no headphones or OTG cable. The flip cover is cheap but that doesn’t matter to me as I won’t use it. The phone does not feel too big it feels comfortable in my hand and I can easily use it single handed. It is heavier than my previous phone (160gm compared to 113gm) but doesn’t feel too heavy in my hand although I certainly know its there when its in my pocket! A number of people have mistaken it for an I-Phone even though its all black, the screen is much larger and it doesn’t have a metal band round it. Yes, I am happy to be seen with it. The display is large and vibrant, I can use all the facilities that I want without the need of a microscope or stylus and it displays photos and videos stunningly. Its well made and feels like a quality device and doesn’t feel like a ‘cheap Chinese knock off’ as my friends kept calling it. They don’t now they have seen it, well not to my face anyhow.

As for the accessories I bought before I actually got the phone: the OTG to HDMI cable doesn’t work, the Samsung Class 10 64gb TF memory card works great once I allowed the phone to reformat it. The ‘Universal’ docking/adio/charging station I bought from AliExpress is still in the post (I hope) and the expensive leather case (Mediadevil for a Samsung Galaxy S4 which is almost exactly the same size) fits like a glove and makes the phone secure from bumps and knocks and look great. 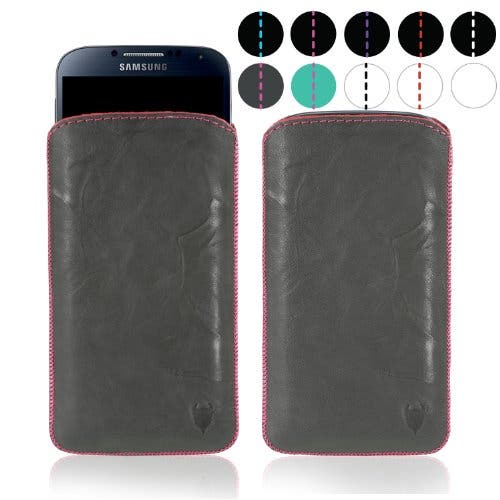 I was originally waiting for the Advanced 32GB Rom 4GB Ram Turbo processor version of this phone but I decided to take the first one offered on the grounds that when the Advanced does finally become available I could always sell this one on Ebay and get the new one. It is not likely that I will be doing that! It performs very well, most of the Apps and all of the downloads go to my 64GB TF Card. I’ve down loaded all I want and there is more than 2GB of the 4GB still free and no matter how many Apps I seem to have running there is usually between 330 MB and 100 MB still available. Everything runs fast and very smooth.

Would the phone work as I expected?

The dual SIMs work well on both the UK O2 network and in Spain on Telefonica.
I have an O2 PAYG Sim in the full sized slot and that supports 3G 2100MHz and GSM 850/900/1800/1900MHz in the UK and a Telefonica 3G microSIM (cut down as they don’t do a microSIM!) in the other slot which only supports a microSIM on 3G. No I haven’t tested other 3G wavelengths! It works fine and I am leaving it alone.

The camera takes good stills and video. The quality and definition is very good, ther video hasn’t shown and of the refocus issues that Andi suffered from. I do have an issue with the camera in very bright sunlight in as much as the automatic aperture control seems to slightly overexpose the picture, see below: 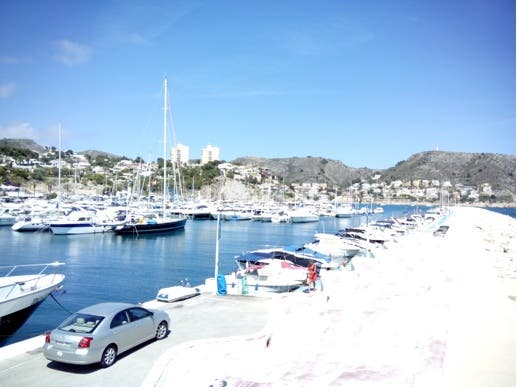 I can ‘stop down’ the phone manually in these conditions, which occur frequently in Spain and never in the UK. I am experimenting with other phone apps and I am hopeful that they will resolve this. I have tried Camera MX but it’s a bit cloudy so can’t really retest the problem.

The battery life is more than sufficient. From fully charged the battery supported a good two days of fairly heavy use, downloading APPS, testing the GPS, Camera, playing some games, playing music and watching some video. On standby with no wi-fi, no GPS from fully charged for 24hrs the phone used 7% of the battery so by extrapolation, 100% battery might last for 14 days (perhaps).

The screen is visible in bright sun light, better than I expected and much better than my tablet or laptop. The visibility is very good apart from when bright direct sunlight shines straight onto the screen. A hand above the screen solves the problem easily.

I am impressed with the audio capabilities. I use N7Player as I prefer its user interface, I have over 600 Albums on the device and I can select Artist/Album quickly in two clicks and the sound through my Koss headphones, my car radio or my old Hifi is very good. The built in speakers sound good but I rarely use those.

There is a tiny red led Notification indicator on the phone which is very useful and flashes to indicate missed calls, SMS messages, emails etc.

Android 4.2 is a significant improvement on my MID tablet which runs Android 4.0. It is slicker, it runs nearly all the Apps that I use with many improvements and downloads App updates quickly and trouble free in the background. The Internet performance is much better that my 4.0 tablet. 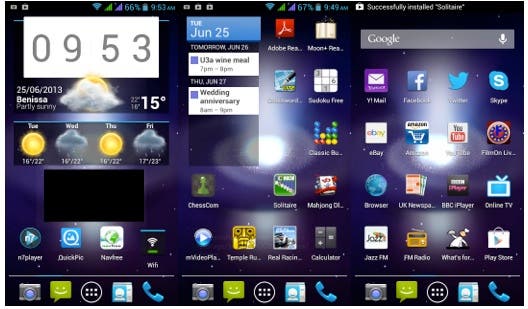 The ROM seems to have been installed correctly. The phone was delivered ‘rooted’ and in Chinese but it was easy to set the language to English. It had Google Playstore installed so getting my Apps was no problem. I prefer the Nova launcher and by installing that could I get rid of the Chinese Widgets and Apps from the home screen. There are still a few Chinese Apps installed and they won’t uninstall but they are not visible and cause no problems so I am happy to leave them to lurk in the App Draw.

A small number of my preferred Apps are not currently available on this latest version of the OS. Most noticeably Metro Station which I like for setting up Folders / Simplistic Icons on the home screen but I am sure it will be updated and available soon. There are some bugs in certain 4.0 Apps that really frustrated me, particularly the JazzFM App and Tasker, they all seem to be corrected in 4.2.

Would the phone I got have early release problems?

From Andi’s review I knew there may be a small number of problems: slow GPS lock on, potentially weak Wi-fi, focus problems on video recording and no OTG. Well the OTG is definitely not functioning although I can’t complain as it wasn’t a feature when I actually ordered the phone. This is now functioning on the later phones so I am hoping that a software upgrade may add the facility. The GPS is slow to lock but there are Apps such as Fast GPS and GPS Test which solve this. There is a Rom available already which corrects this problem but I am leaving it at the moment. I have not experienced the video focus problems and the wi-fi range and speed seems fine. It is at least as good, if not slightly better, than my Acer Laptop. In Spain most houses are made with concrete block internal walls, so normal wi-fi range is about two / three rooms and no more than two internal walls. I am going to reposition my router to remove one wall from the equation and I have two wi-fi boosters in the post from Aliexpress at $11 each…..I may do a review of these if they ever arrive!

In summary, I am delighted with my Jiayu G4, there a couple of very minor issues which will probably be fixed and all in all I can anticipate living happily with the phone for the next couple of years. I would probably have chosen the Advanced model mainly so I could have the 32GB Ram for another 300 albums but this model is more than adequate. I hope they fix the OTG and the GPS glitches but they are not show stoppers. Rather than updating the phone my next project (probably next year when the next generation of super SOCs eventually become available) will be updating my tablet….if this phone makes it to last a year!

[templatic_contentbox type=”author” title=”About the Author”] Brian Jackson – Chinese Gizmo addict. Thirty years IT and Telecoms experience including IT Strategy Manager for one of the UK’s largest Insurance companies and Project Manager of the software development for the UK’s Local and Main digital telephone exchanges Signalling Interworking Subsystems. [/templatic_contentbox]

Next Xiaomi heading to North America in 2014?