After a longer than expected wait Elephone have finally shipped their Elephone Vowney smartphone, so was the wait worth it? Keep reading our full Elephone Vowney Review to find out.

So after a long wait, and a few delays what is the flagship Elephone Vowney like? Was it worth the wait?

The Vowney is no stranger to me and I originally got my hands on the first working prototype last year when attending the ZUK Z1 launch. From that original working sample to this production version nothing has physically changed. Our review unit is the gold finished version of the Elephone Vowney with 5.5-inch 2K display, and all the rest of the drool worthy high-end hardware we have all been patiently waiting to see on sale.

Up front we have a gold face with thin gold bezels, a front facing 8 mega-pixel camera and a chin area with oval icon that looks like a home button but is actually just a notification light. Like many phones designed in 2015 the Vowney has a black border around the 5.5-inch 2K display, but it is narrower than some other Elephone phones we had seen during the previous year. Elephone have made no attempt to hide the thickness of the Vowney, it’s an 8.9mm phone and it looks like one too. The flat sides are made of a mix of metal (the brushed areas along most of the length) with plastic at the corners, top and bottom. 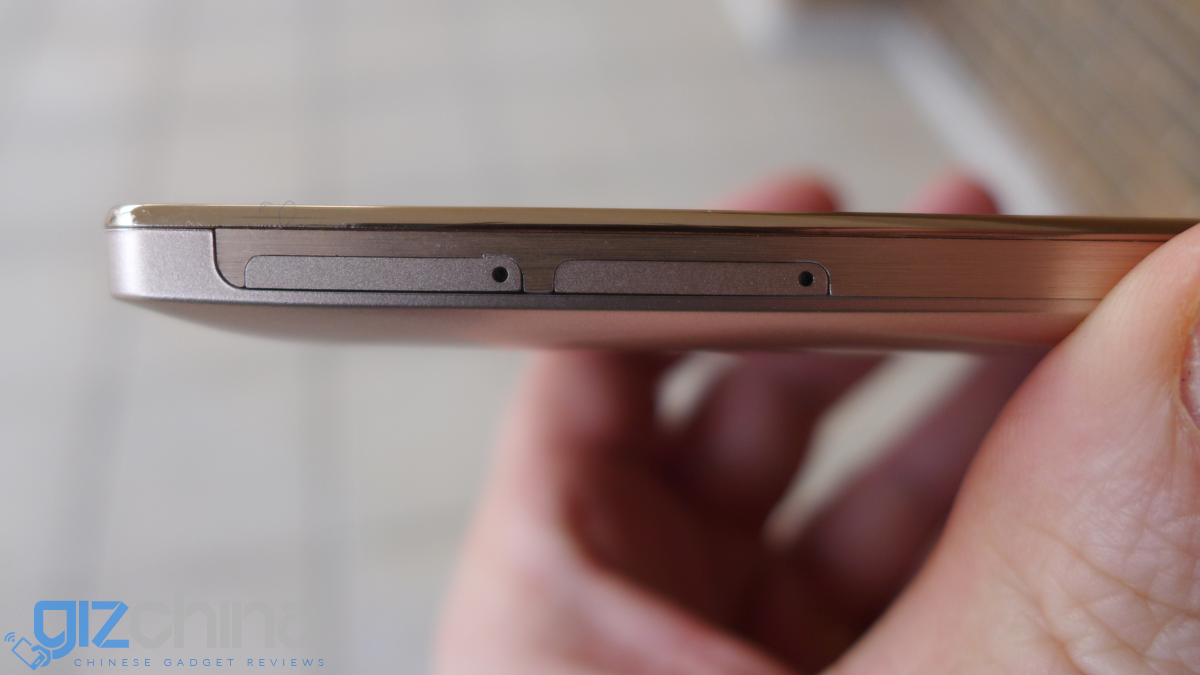 The sides of the phone have the power and volume buttons on the right side of the device, while the left has dual SIM slots. The upper most tray can be used for either a micro SIM or micro SD card, while the second tray is just for SIM cards. In the base we have a micro USB between two areas that are drilled out to look like speakers. The left (looking from the front) is the only speaker though, while the other is a microphone. The very top of the phone is home to just a 3.5mm headphone jack, there is no IR remote which has become standard on mid-range phones much cheaper than the Vowney. The rear of the Vowney is none removable so no access to the 4000mAh battery.

We also find a 21 mega-pixel rear camera on the back of the phone with dual LED flash and  fingerprint scanner that will recognise your fingerprint regardless of the way around you hold your phone, however the accuracy isn’t that great. The Vowney looks just like the phone we have seen in all those images and renders over the past year. It is thicker than some of you might like (thicker still due to the protruding rear camera), but not enough to bother me while testing.

Build quality is ok, but there are a few gap issues here and there and my model has a rattle coming from it which isn’t the physical buttons on the right. 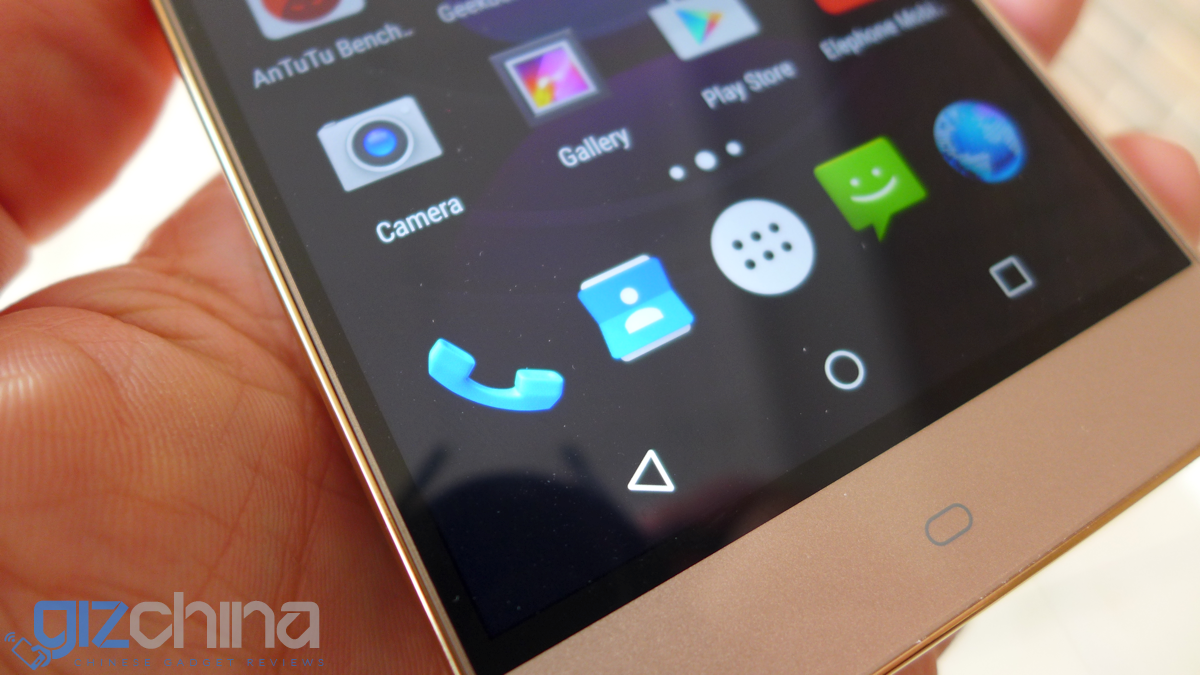 As we mentioned the 5.5-inch panel on this version of the Elephone Vowney is a 2K panel with a resolution of 2560 x 1440. Even today there aren’t many phones on the market with a 2K panel, and the Vowney is about one of the most affordable.

The 2K display is an obvious high-end feature of the Elephone Vowney and although I would never choose 2K phone over a 1080 phone on resolution alone I have to admit that the panel on the Vowney is rather nice.

Pushing the pixels around the display is a Mediatek Helio X10 chipset with 4GB RAM. The chipset is similar to the SoC in the Xiaomi Redmi Note 3, LeTV X500 and Meizu MX5. It is one of the best processors that Mediatek have ever made. Even when having to push all those extra pixels around on the QHD panel the Helio X10 does a great job. Everything from normal everyday use and gaming is super smooth.

4GB RAM is a ton of memory and you really won’t want more than this (not that more RAM won’t be available this in 2016 phones), while storage is 32GB, which can be expanded with the micro SD card tray. Oddly the the chin of the phone has an oval icon that would suggest it acts as a home button but this isn’t the case. Instead the Vowney uses onscreen navigation for getting around the stock Android installation. A look in to the settings reveals that there is no option to switch the onscreen buttons off and use hardware buttons instead. Either they aren’t available or this is coming in an update.

What the oval does do though is act as the LED notification light. The only option for this are found under the ‘BreathLight’ setting and simply allow you have the light on or off when charging, receiving a notification etc. The only colour available is white, so not RGB options on the Elephone Vowney. On the rear of the Elephone Vowney is a fingerprint scanner. I have used other Elephone phones with a similar rear touch fingerprint scanner, but so far I have been really unimpressed with the model on the Vowney. I’ve seen that other Vowney owners are able to unlock the phone with one touch even with the screen off, but my sample doesn’t work like this and so far accuracy is poor.

When Elephone first started to develop the Vowney, a 4000mAh battery sounded damn impressive, but that was over a year ago and now even the 699 Yuan Xiaomi Redmi 3 has the same size battery. In the case of the Vowney though the battery has a much higher resolution screen to handle, more RAM to power, a more powerful chipset and a fingerprint scanner. I got around 3hours 50 minutes of screen on time from the Vowney and about a day and a half of regular use. Not the worst I have seen but not the best by a long shot either.

Audio performance is average at best from the single external speaker, but with headphones plugged in the audio is pretty good.

One issue I have had is WIFI performance. Now and then the WIFI signal drops off for no reason then comes back. Hopefully this can be fixed with updates.

Other hardware details worth noting are the 8 mega-pixel front camera, 21 mega-pixel rear camera, USB OTG, and LTE support for bands 1/3/7/20.

As usual I ran a number of benchmarks on the Elephone Vowney, but was unable to get 3D Mark to run. I tried various options, rebooting etc but it was no use. Other benchmarks ran fine, and as already mentioned gaming is smooth. I played N.O.V.A on the phone and was quite impressed how smooth and stable it was. Gaming and running benchmarks does raise the temperature of the phone, but it never got seriously hot.

The main camera of the Vowney is an IMX230. This is a Sony made 21 mega-pixel sensor. I already posted sample photos from the Elephone Vowney here, so am I impressed?

Well yes and no. I was really expecting the Vowney camera to be terrible, but overall the phone is capable of some nice photos. But, they aren’t what you would expect from a 21 mega-pixel camera.

It’s easily the best camera that Elephone have ever offered in a phone, but if you are expecting performance like a 21 mega-pixel camera in a Meizu, LeTV or other phone you will be disappointed. You will notice that the video sample isn’t 4K and that I haven’t provided a slow motion sample. This is simply because the current software version doesn’t support these features. Elephone have told us that they will be optimising the camera so things can only get better and more features should be added.

On paper the Elephone Vowney looks like a killer of a device, even in the hand there are features which stand-out as being pretty good. The screen is nice, although the 2K resolution is unnecessary and hurts the battery. Performance from the Helio X10 and 4GB RAM is very good, and the camera is the best Elephone has offered (but not as good as an IMX230 should be). 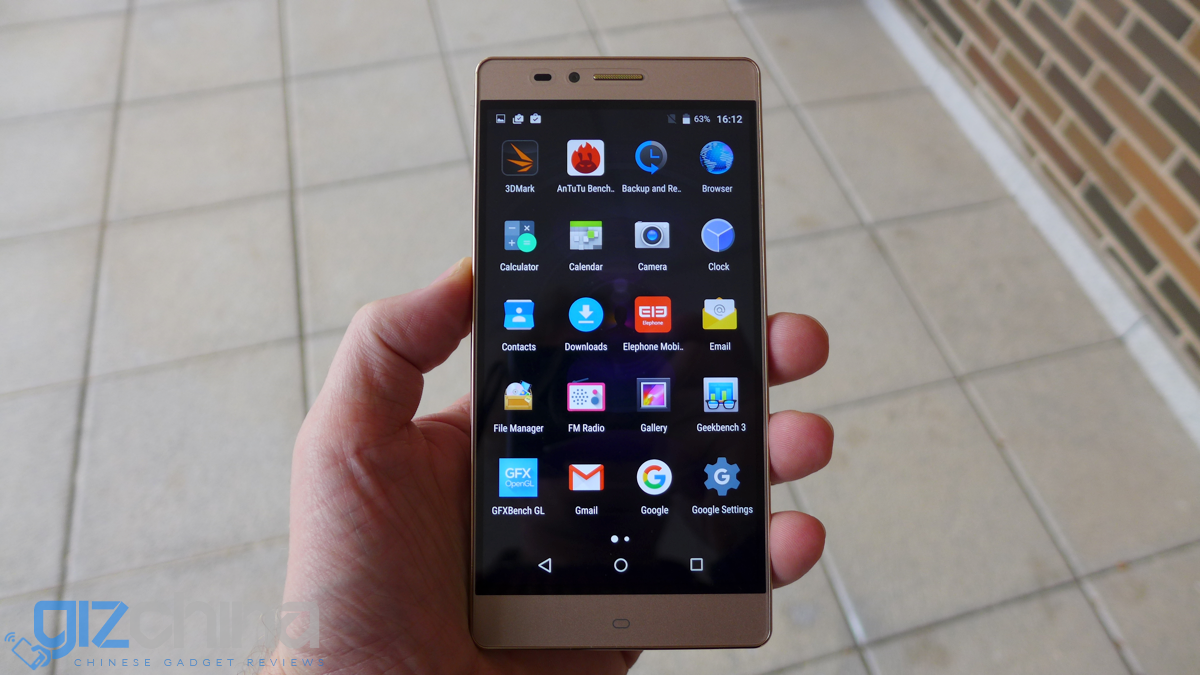 Had Elephone launched the Vowney months ago then they would have done very well on the market, and by now the phone would be running a really polished OS with updated camera performance, but as it is they are too late.

There are already plenty of other phones with the Helio X10 from bigger brands and at a lower price. The LeTV Le1 can be bought for nearly half the price of the Vowney and it is a better phone (sure there is no 2K display and the no fingerprint scanner but the UX is much better). Other options would be the Xiaomi Redmi Note 2, Note 3, Meizu Metal and MX5, that’s some hot competition that the Vowney can’t quite compete against, even the Vowney Lite could be a better option (depending on price).

At $299.99 it’s a little too much, but if pricing drops to a bargain price with the P9000 launch and we see some decent updates, the Vowney could still be one to watch for.