Back in December, at Qualcomm Summit, when the chip maker was releasing its new Snapdragon 845 high-end SoC, Lei Jun appeared on the stage and revealed some important data concerning their cooperation and upcoming models. First, he said there are over 238 million Xiaomi smartphones running on Snapdragon chips. This is an amazing number showing their deep collaboration state. Second, Lei Jun said the next Mi flagship will hit the market in spring. Today, Xiaomi mobile phone product marketing director, Zang Chih-yuan posted on his social media page that Xiaomi will attend MWC 2018 in Barcelona, Spain in late February, at Hall 6. Thus the Xiaomi Mi 7 and Samsung Galaxy S9 will be announced at the same time, as talked earlier. 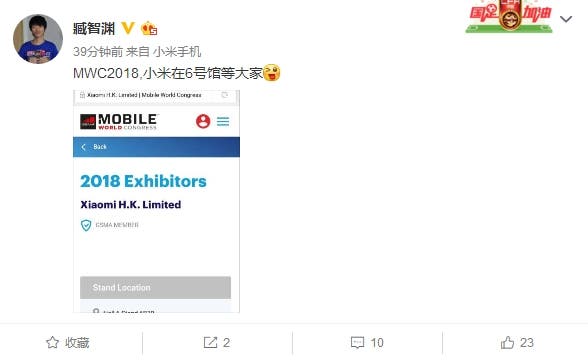 Generally, we have been waiting for the Xiaomi Mi 7 to debut in the Q1, 2018, because the current Xiaomi Mi 6 was launched the same time in 2016. But the competition in the high-end smartphones market is tough. So every manufacturer tries to be the first. A month back, we saw a leaked document showcasing all Snapdragon 845 – powered smartphones including the Mi 7, Samsung Galaxy S9, LG G7, and many more. If believing in this leak, the Mi 7 will be available for purchase in April, while the Samsung and LG models will come in February.

Earlier, there were rumors as Qualcomm is optimizing the SND845 for the Xiaomi Mi 7. Many have been thinking this will affect the launch date, and maybe it’s so. But the truth is Xiaomi is going to come in with a very powerful and innovative smartphone. The Xiaomi Mi 7 is said to come with an AI component in the camera software, wireless charging, facial recognition, full-screen, and many more. Thus the company will continue focusing on innovations and quality. In this sense, if the Mi 7 release date is a bit delayed, no one will mind.