Chinese phone company CDS have launch their version of the popular Samsung Galaxy S3 clone a few months later than the rest of the pack, but judging by the quality of hardware the wait could have been well worth it.

Like the majority of must have Chinese phones, the CD1000 gets a MediaTek MTK MT6577 dual-core CPU, but in this case it a 1.2Ghz model rather than the 1Ghz speed most other manufacturers are going with.

Following the same tried and tested formula as JiaYu and UMi, CDS have also loaded their Galaxy S3 clone with 1GB RAM and 4GB ROM and there is room to expand the memory with a 32GB micro SD card. 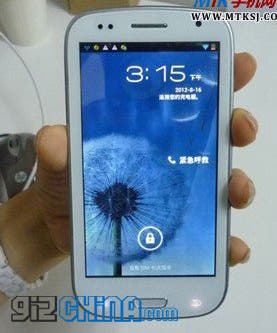 The front camera on the CD1000 is pretty spectacular as this is one of the few Chinese Android phones to have a 3 mega-pixel front camera. The rear is an 8 mega-pixel unit with LED flash.

In the screen department the CD1000 Samsung Galaxy S3 clone gets a 4.5 inch unit for Sharp with a HD resolution of 1280 x 720 which should be on par with the screen on the popular JiaYu G3.

The only areas we can see the CD1000 really failing is in the battery department, as this Chinese Android phone only get’s a 1700mAh battery which is smaller than the alreay tiny battery found in the UMi X!!

There is also no dual sim support which is likely to put a lot of potential customers off too.

Next Watch the JiaYu G3 Smash Walnuts with its Screen!