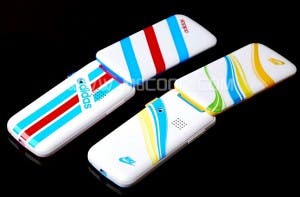 This pair of sports branded phones have probably never seen the inside of a Nike or Adidas factory, they probably haven’t even met a Nike or Adidas employee either since they are both fake (fake Nike and Adidas not fake phones that is).
The clone community were obviously worried that Puma’s step in to the mobile market may affect Nike and Adidas, so have decided to release hand-sets on their behalf. Jolly nice of them!
The two phones share an identical specification list, which includes a 2 mega-pixel camera, dual sim support, SD card slot and basic multi-media functions such as mp3 and mp4 playback, but differ in their rather 90’s inspired branding.
Both phones look like they would fit in nicely with a shell suit wearing family from the 1990’s and even have ‘cool’ back-lit bands of colour on the front side of the unit, perfect for the odd rave.

Join GizChina on Telegram
Via: m8cool.com